I got re-bitten by the aquarium bug.  I was discussing watering house plants and how fish tank water is the best stuff and then BING! I started thinking, maybe I don’t want chinchillas.  Maybe I want fish.  Then it was South American fish!  Tetras!  (Aquatic) Plants!  Power filters!  Substrates.  I even rearranged the plants and furniture again to make a corner where I might put said fish tank.

It’s Autumn.  Woohoo.  I’ve been waiting for pumpkin spice whatevers and the mild temperate weather.  I have 2 kinds of pumpkin beer (ACE pumpkin cider and Pumking) chilling in the fridge.  I just went to Trader Joe’s and got canned pumpkin and a jar of pumpkin pie spice.  And the weather is actually acting like the season.  I’m ready to make my seasonal clothing swap this week.  The A/C has been off for 2 or 3 weeks now.  It felt like the season was slow to come and then woosh, it arrived.

First thing someone asks me when I meet them:  Where do you work?

Second thing someone asks me: What do you do?

Yesterday we ate at Temari Cafe because I had a kickass onigiri at the Tokyo Fish Market and I remembered that Temari has it.  And I also remembered it to be pretty decent.  Not so.  The rice wasn’t seasoned.  The seaweed didn’t cover the rice. and it was soft/soggy rather than crispy.  And the filling wasn’t as flavorful.  We also got a lot of appetizers and an unagi donburi which also fell short.  Everything was just not good to the point where I’d just rather not have it at all.  It wasn’t even close.  Maybe in a few months I’ll think it’s okay again, but given the wait and the mediocre food, I’m not sure I’ll bother to find out.  I really REALLY wanted to like it though.  I wish our 7-11’s here were half as good as the ones in Asia.  Where else can I find a half-decent onigiri?

We paid the West Coast a visit recently. This time, the air was noticeably dusty and dry. I could feel the drought! It’s the first time I visited where I didn’t wish I lived there. There was a persistent haze. Maybe that’s why for this trip, suddenly I was noticing all the cons. Like it smelled of pee. And the sidewalks are cracked, raised, overgrown. The neighborhoods are a hodgepodge of disheveled and maintained. They’re not ones for order. I still love the walkability. The succulent plants and gardens everywhere. The sun.  The food.  Of course, the food.
We ate at:

I think my friend misinformed me when she called the flagship Safeway in Georgetown, “Sexy” Safeway. I think it was actually coined “Social” Safeway. I don’t know by whom, but regardless, it was neither sexy nor particularly social. And I feel like I’m a pretty good judge of grocery stores because I spend a lot of time in grocery stores.

So anyway, after I heard and read so many wonderful things about this social sexy Safeway, I planned a weekend excursion to go there. We were going to hit Shophouse Kitchen for lunch. Then to the Old Stone House. And then the pièce de résistance – Sexy Safeway. 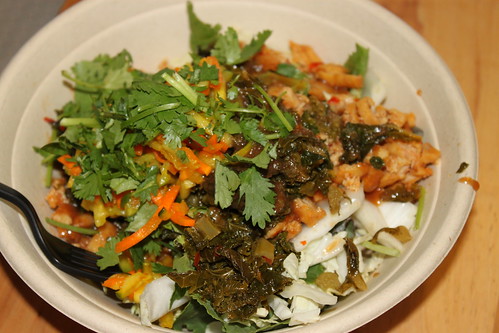 Shophouse – I really wanted to like this place. Anyplace that has vegan options in this town gets bonus points in my book. But it just wasn’t very good. First of all, their salad mix had raw chopped napa cabbage. I have a hard time accepting the fact that napa cabbage can be consumed raw after seeing a pet iguana chowing down on some. I ate them anyway, but it didn’t feel right. I have the same misgivings about raw kale and cabbage too (even though I love slaw). But that alone wasn’t that bad. Overall, it was just too salty and the dressing tasted not good.

The Old Stone House was closed so we just walked a little bit around the gardens and then off to Safeway! 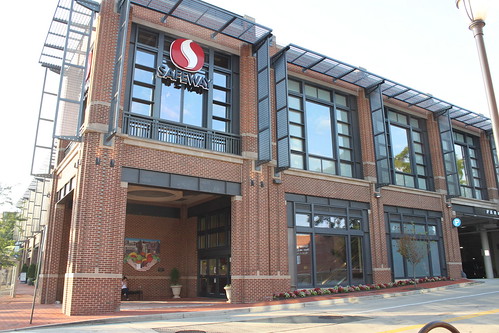 I’m only comparing it to other Safeways I’ve been to, and while it is very nice, it didn’t stand out to me either. I got Nabisco Chocolate wafers – Oreo’s without the cream. Wonderful with coffee. And some avocados. They have a very nice beer/wine section and prepared foods section. They carry plenty of kombucha options. And their produce looked top notch. Maybe what made it not so appealing to me was how empty it was, hence – not-so-social. Where is everybody?!? What else is there to do on a Saturday night? So even if it didn’t seem to live up to the hype (which, was a tall order) I had a great time. Okay, maybe it was a little bit sexy.

Look at the bubbles in the kombucha. The more juice and more days I give in the second ferment, the fizzier it gets.

Luckily the plants I did in are prolific and very forgiving. I cut off the dead stems and re-rooted the live cuttings and in a week or two, I had enough to replant.

A little smaller, but good as new!