After my fish died, with the unfortunate water filter mistake, my shrimp came out of the wood work and multiplied like crazy.  I realized there’s no such thing really as shrimp-friendly fish.  Anything that fits in its mouth is fish food.  So I dedicated my tank as a planted shrimp tank and they have taken off like crazy.  Today, I doubled down, adding 4 blue velvet’s and 2 amanos. 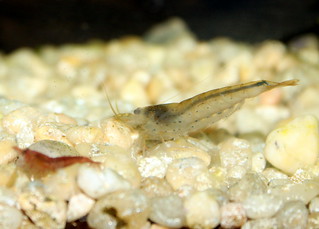 According to aquarium forum’s amano’s are supposedly staples in planted tanks.  They keep algae at bay. The amano is on the right. The little guy on the left is a half-sized cherry shrimp. 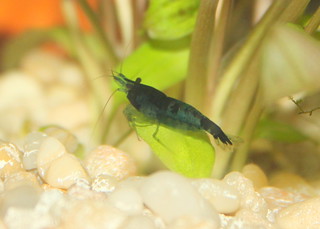 Blue velvet’s are essentially like cherry shrimp. They look exactly alike except one is red and the other is blue. The aquarium staff told me they will interbreed too so I may get some weird hybrid version, which is kind of a bummer. At $10 a pop, I would’ve preferred to keep some pure bluebloods. But hey, love conquers all I guess.

The guy at the fish store also put a piece of hornwort in the bag for the shrimp to hang onto during transit. I don’t have hornwort in my tank so I’m hoping this little piece will grow. It’s supposed to be invasive-species-level very easy to grow. Last time, they gave me some java moss which I already have.