Just about the weirdest allergy I have is rice. I’ve eaten it all my life and will continue to eat it. Even though it’s like giving milk to a lactose intolerant. I call it jet fuel. Not sure about the people around me, but mostly I don’t mind it. I’m so used to it because I’ve been eating it all my life and dealing with the consequences. In fact, I thought everyone bloated after eating. But now that I know the cause I do try to limit it. Granted when I’m traveling and Chinese is the only option I have, well, let’s just say I could start a forest fire with my ass.

That’s the long way of saying this is how I came up with my new “rice” which is quinoa, cauliflower, lentils, and oatmeal. It cooks up like a gloopy blob of “rice” and I can have it with just about anything I would have with rice.

I have been making this regularly for the past few months. It makes an easy vegetable side dish that goes with everything savory. Noodles, rice, tofu, avocado toast.

Chop up a bag of red onions.

Boil salt, sugar and water. Let it cool. Add apple cider vinegar to the brine. Pour it over the sliced onions. Refrigerate for a couple of days and it’s ready to eat. I keep two jars going all the time. The brine is re-useable, but I top off with more brine each time because I use the brine in salad dressings and for avocado toast.

If I had to guess amounts, maybe 2 tablespoons of sea salt, 1 tablespoon of sugar, and 3 cups of water. And a half cup of ACV. I could be totally off here. Just experiment.

While browsing around a street of shops in Hillsboro (by Vanderbilt University), I found a kitchen store that carried these unassuming flat end serving spoons. I bought one on a whim and now am loving it; the flat end design makes sense! 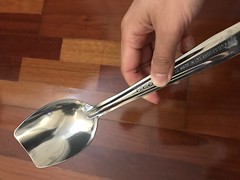 It’s not like I HAD to go to Nashville to be in the solar eclipse’s path of totality.  But that the path drifted through Nashville was a sign I wasn’t about to ignore. And lo, it happened. She started announcing her new album on eclipse day. We are kindred spirits.  We understand each other. 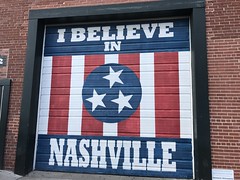 Nashville, though it be what I consider to be deep south, is not at all how I imagined deep south to be (gun totin’ bible thumpin’, secessionists).  I was wrong.  Nashville is retirement-worthy, an honor I don’t hand out easily; it follows Hawaii.

It is a trendy place.  Fancy.  Gentrified.  What was that word some real estate articles like to throw around?  Tony?  Yeah, Nashville is a tony town. The people are glamorous.  It felt wealthy.  Coming home after hanging out in Berkeley or NYC makes me feel like our hood is so nice and clean. But after Nashville, I felt like I was coming home to a dump.  Isn’t it odd, the higher the cost of living, the dumpier the place? Something for me to keep in mind for the future. Maybe it’s the rising tide effect. Wealthier places have a higher gini coefficient probably.

Also, Nashville is hands down a better food city than DC.  We dined twice at Little Octopus where they served the most creative dishes. 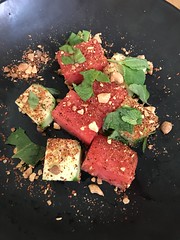 This is a cucumber watermelon salad made with chili, lime, peanuts, and mint. We came here two nights in a row.

Another delicious place we stumbled on is The Grilled Cheeserie. 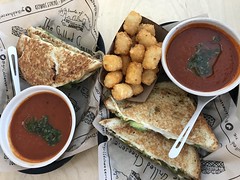 Tomato soup, grilled cheeses, and tater tots. All of this is plant-based! So addictively delicious!

And if you’re into music, you’re surrounded. We didn’t even have to try to see a show. One night, we stopped by a bar after dinner and they had a jazz/bluesy singer performing. 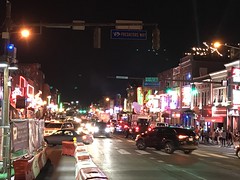 Another night, we walked through Broadway and there were live shows all up and down the street. They all sounded record-contract worthy to me. I have even more respect for her skills after seeing Nashville. That TS was plucked from all of these gifted artists speaks to her level of talent. She’s the real deal.

So I wanted to walk where she probably has walked many times over. 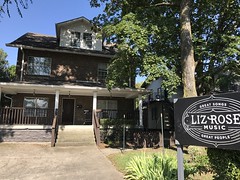 To her collaborating song-writer, Liz Rose’s studio on Music Row (which looks like a street of single family homes). They wrote Teardrops On My Guitar, Fearless, You Belong With Me, and All Too Well together, amongst others.

And of course, her own record label’s office, just a few doors down. 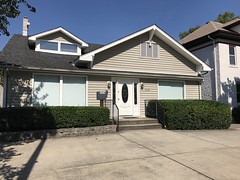 Big Machine Records. Totally unmarked, it looked like somebody’s home so, feeling intrusive and rude for loitering about, I quickly took a picture and left. Being there made my heart flutter.

But we weren’t done fluttering my heart.
This is the Adelicia. 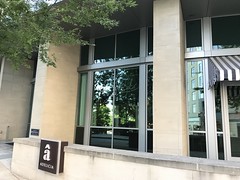 Unless she’s since sold it, this was the first place she bought and the first night she spent alone in her own place inspired the song Never Grow Up.

The real star of the show for this trip was our star though. The sun! (Sorry, that was cheezy) 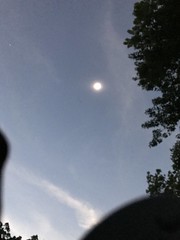 Not a good picture of the total eclipse, but this was a photo of it. Experiencing it was awesome, in the truest meaning of the word. It was humbling. And for a split second before we had to put our eclipse sunglasses back on, the diamond ring was the most beautiful part of the show. 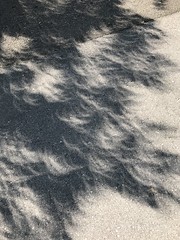 These are crescent-shaped shadows cast from the trees when the moon was starting to uncover the sun.