After 20 years, our old stacked washer dryer gave out. The first thing I did when it broke was I called the plumber. My go-to solution. When I shared my plight with my coworkers though, they asked me why I hired a plumber. Shouldn’t you have called an appliance person? So I canceled the plumber (when I called to cancel, he then said he also wondered why we’d called them for a broken washer. Gee, thanks for telling me when I made the appointment. I guess he would’ve been happy to take our consultation money to send out a guy who would just advise us to hire an appliance guy. That’ll be $150, thanks! I think we’re gonna need a new plumbing company. Anyway, I called an appliance repair person to try and fix it but he wasn’t able to get it to work after two visits so we gave up and got a new set. My fear is, these new units aren’t made to last as long as appliances of yore. Only time will tell. 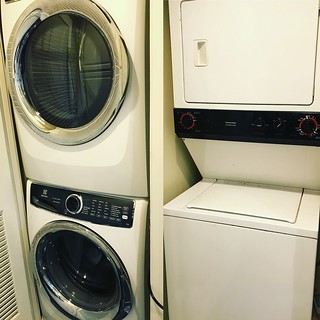 I do really like the front load washer though. I watched it the first few runs and I feel like the clothes throwing action from raising it and dropping it cleans more effectively than swishing clothes about in a tub. And also they’re more resource efficient. And I feel like they’re gentler on my clothes. There’s less rubbing of fibers against each other. Just the falling and smacking downwards action. Also its spin dry is insane. Makes my clothes drying rack work that much faster. So overall, I highly recommend a front loading washer. This is also a 2018 purchase of the year. I can have two purchases of the year. I can do whatever I want. I’m the boss in this neighborhood. Or blog. Whatever.