Me: Oh look! There’s a person there on their couch. Is that a cat or dog on there?

Coworker: I think it’s a cat. They’re looking comfortable on the couch.

Me: I love watching the doggies and kitties across our office windows!

Coworker: You should get at pet!

Me: I know! I’ve been wanting rats.

Me: Yeah, they’re so cute and they’re smart! They learn their names and will come when called.

Coworker: You should have kids.

Coming back from the New Year, my coworker dropped by to catch up with me about his newfound interest in positive life outlook? I don’t know how else to describe it. Connecting to inner spirituality? Think meditation, nature bathing, values-questioning type stuff. He recently had a health scare where one of his heart arteries was majorly blocked. It wasn’t a heart attack, but he needed surgery to get a stent to open up the flow. He mentioned his wife also isn’t in the best of health so he’s been re-evaluating his life and thinking about retirement.

He mentioned a few things that stuck out to me:

Anyway, I was glad to get a glimpse of what goes on inside the mind of someone as they start thinking about retirement. I sometimes feel like I’ve been ready already, but when it’s staring me in the face, I will be a lost little lamb!

First day back at work from a two week extravaganza where I kept the hours, diet, and life of a college kid. Family has a way of bringing out the old habits of youth. I even fired up Sims again. Unfortunately my body doesn’t handle that like it used to so I got sick. I still have some lingering congestion from my New Years cold but I know I’m on the mend when my immune system goes back to tilting at windmills (aka allergies).

I didn’t really feel like going to the gym today, but I ended up going to yoga tonight. It’d been two weeks and I felt stiff and hoped maybe the stretchy part would help. The gym was packed this evening. I forget how busy things get after the New Year at a gym. I supposed I was glad I went even though I wasn’t feeling it. I did look at the clock a few times and took whatever easy option I could. At the beginning of every class this instructor often asks everyone what they’d like to work on (it’s a small group). I was tempted to say savasana, one hour! I still feel stiff but maybe less so? Fighting entropy is a losing battle. But fight I must!

How was your weekend?

Oh we got our decorations up.  My husband got on the roof and I couldn’t watch, but it’s done now and it looks great!

Wow on the roof!  That must’ve been nerve wracking. He has life insurance right?!

I know! Earlier in the year, he got a chain saw and was cutting down some limbs off the trees and he decided to tie it to his waist so it would free his hands.  I couldn’t watch.  I finally had to leave the house.  And when I came back, he had an iced tea in one hand and his other hand had a big ol’ bandage around it.  He had put his hand on the blade before it stopped spinning and grazed it.

I’m a firm believer of outsourcing.  Also, that chainsaw needs to magically disappear.

I used to resist bringing plants to work. I was resisting anything that would make my work space feel homey. Don’t get too comfortable, you’re not staying long. However, I’ve collected many propagation cuttings from my coworkers and even strangers I don’t work with. Imagine a rando popping her head in, admiring your plants, then asking for a clipping. Yup, I’ve done that. Most plant folks don’t mind.

I finally brought a plant in to work last year. It was doing pathetically at home and I was pretty uncertain whether it would make it through the dark winter. At the time, I didn’t have a window at work so I put it on someone else’s window ledge. He’s a plant lover too so under his care, the plant flourished. 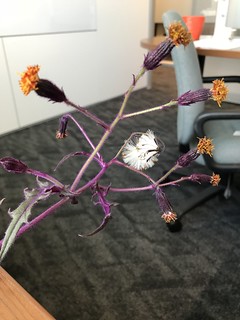 In fact, it bloomed. I’d never seen one of these plants bloom before so that was fun to watch. The flowers stink like feet or stinky cheese though.

After giving away cuttings to the coworkers who wanted to try growing this fuzzy plant (purple passion), I brought it home since it was finally doing well. It’s still doing great.

Recently, I got a workspace with a window and now I’m going to start bringing in some plants to work. I currently have one that belongs to someone else and another woman comes by to water it. It’s nice having it around but I think I have room for more. Lots more! Right at the top of my list are a spiderplant because my current plant finally revived this summer and gave me a couple of spiderettes, a philodendron, and a sansevieria. Perhaps a zeezee too. The spiderplant and philodendron really don’t do well in my mostly dark shoebox. Every winter, they start dying until I think they’re goners. Then spring arrives just in time for them to revive again. I’m hoping the window at work will be better homes for them. The zeezee and sanseveria are plants I’m almost always propagating. They’re such slow growers that I feel like I have to pregrow them for anyone who’s interested in taking a propagation. After one year do you see anything with the sansevieria and the zeezee takes almost two years to see something like this. 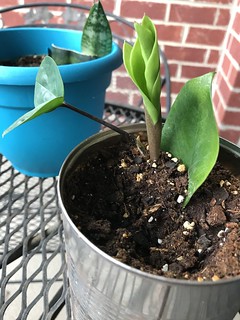 This is actually my first zeezee propagation that I’ve seen reach this level. The rest were adopted away before they reached this stage.

Those were the audible words that came out of my mouth when I witnessed a man standing nearish the edge of the metro platform drop his phone, then watch it bounce right into the tracks. Yup. He looked down at the tracks. Then he walked hurriedly away, probably to find a station manager who is probably going to tell him to go get a new phone.

I went downtown for a work event yesterday.  During the lunch break, I met up with a friend for lunch and we walked around our old favorite walking paths from 10 years ago.  10!!!  Not too much had changed except ourselves.  She said she’s less patient.  I am less restless.  And we both reminisced about when we used to walk around town every day during lunch. I had a few extra minutes and walked around some gardens that we used to walk through.  I don’t know how they do it but the roses were still in bloom.  Then again, it was 70 some degrees today.

Rough start so early in the week.

Speaking of shopping hobbies, I met a fellow fountain pen enthusiast at the same training class. He was using a Lamy 2000 and when I asked him about it, he offered to let me try it, which I did. It was nice but probably heavier than I prefer. It has the heft of the Pilot Metropolitan. He also had the Monteverde OneTouch Stylus Tool Pen. It’s like the nerd’s version of a pocket knife. A fountain pen with a touchscreen stylus, a ruler with 4 measuring scales, a level, and mini screwdrivers (flat head and Philips). Today he brought in his 1943 Parker Vacumatic which looked almost like mine but his was longer. I should have brought my 1946 Debutante. I think his was the Major. I asked him about notebooks and paper and he said he was currently using the Moleskine which wasn’t very good and had bleed through. I will take that as a steer clear. He was also using another pen today that had a greenish marbling design. It was kind of big and fat. I wish I’d asked him what it was. It’s kinda’ neat to meet a fountain pen fool in real life. They exist!

I brought dukbokki to lunch today and while I was microwaving it, a guy came around to the kitchenette. He remarked that it smelled good and asked what it was. I said dukbokki and he gingerly asked if I had been to Korea. Or if I cooked Korean food at home. I could tell he wanted to ask my nationality but I answered his question literally – this is the only Korean dish I know how to make and I’ve never been to Korea (he’s been twice!). I feel kinda bad though that it’s gotten this… touchy/taboo a topic. Ask! I don’t mind. I felt bad that he felt like he had to be careful or something. I’ve seen vids online of people complaining that people ask their nationality, so they just respond that they’re from the U.S., which is fine and all, but I mean, they’re asking for your nationality. And it’s like… yeah I get what they’re annoyed with, but at the same time, eh, no big deal.